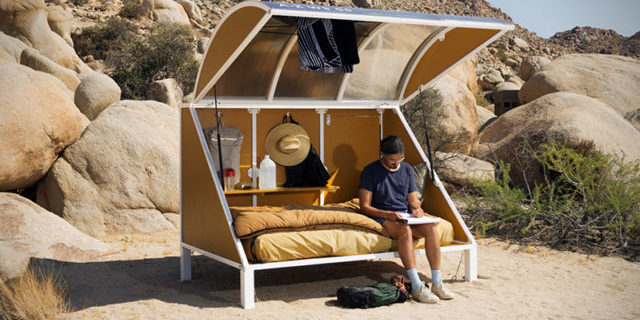 Joshua Tree National Park is a very unique place in the middle of desert. This is the place where you can find the most peculiar wagon stations and namely a project called The Wagon Station Encampment. This one is the work of Andrea Zitter and it consists of 12 small cabins that are spread in this area. The cabins can’t be rented, but they can be used based on an invitation from Zitter who wanted to create a community of campers. To learn more about these tiny homes away from home, you can watch the video below and see some really cool images. What are your thoughts about this project? Would you like to spend a few nights in The Wagon Station Encampment?

Twice per year, when the desert climate is mild, Zittel allows artists, hikers, and researchers to stay in the Encampment, which is adjacent to her home and studio. Designed to facilitate social engagement as well as personal exploration, the Encampment is a blend of communal and private spaces. “Everybody has their desert fantasy; my particular fantasy was probably living on an alien landscape,” says Zittel who describes the Encampment as reflecting a “sci-fi pioneer aesthetic.”