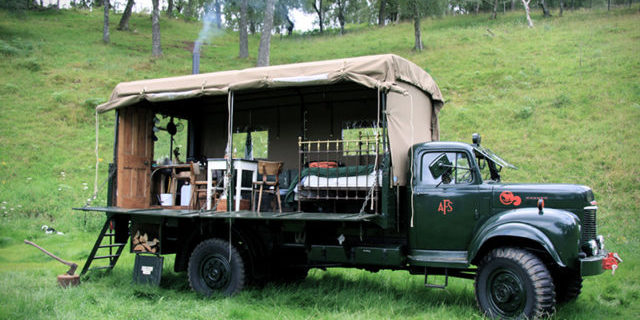 In search for a mobile hotel? This vintage fire service truck transformed into two-person accommodation will surely impress you in a good way! The Beer Moth, as it is called, is actually a 1956 Commer Q4 truck taken from the Manston Fire Museum in Kent, and given a total hotel make-over. The redesign process included raising the roof by a foot and even installing an oak parquet floor, rescued from a Tudor mansion by the way. Comfort is assured via the double bed, but take into account that pets are allowed while kids aren’t. You will find plenty of creative reused stuff in the truck/mobile hotel. For instance, the door is from an old cottage door, the hearth is made from a snooker table and a fire escape is used to make a staircase. Now it’s located on Inshriach Estate but you can’t know for sure for how long, so check it out ASAP!

“Ladies and gentlemen…The Beermoth. Walter, the creator of the Inshriach Yurt, has truly excelled himself in his seemingly never ending quest for a renovation challenge. Having liberated this 1956 Commer Q4 from the Manston Fire Museum in Kent and wrestled it back to Inshriach House, he has quite literally raised the roof (by a foot). Then he laid an oak parquet floor rescued from a Tudor mansion, salvaged snooker table slate to make a hearth and a fire escape to make a staircase. The Beermoth now also sports a completely over the top Victorian double bed, the door from one of the (now presumably a little drafty) cottages at the farm, and the former back wall of the doghouse. The mahogany plinth has been replaced with a wood-burner, the inexplicable stuffed squirrel has vacated the premises, and the cutting edge of unusual places to stay has been delighting (and slightly bemusing) guests ever since. Why not pop over to Walter’s gin distillery too, recently voted Channel 4’s 2015 Shed of the Year!”